When it comes to cars, purism is synonymous with extreme sportiness. In the mid-engine GTS and GTS sports cars, you feel it right away. And it only gets better when the roads are up to the challenge of the cars. The proof is in a tour through the highlands of the Black Forest.

We’ve just crossed the border into Germany near Basel, seven hours on the autobahn behind us since the Mediterranean, with the last 290 kilometers in a monotonous just-making-headway mode on the speed- limited highways of Switzerland. Now, at last, we can finally unleash the 250 kW (340 hp) of the GTS—but no: a traffic jam. Standstill. The autobahn’s backed up for over 20 kilometers in both directions and the police are calculating the wait until we can get moving again in days rather than hours.

Good thing the Communication Management (PCM) warned us in time. We take the next exit to avoid the mess. The free-flowing Bundesstrasse 31 seems like a little path of paradise after the autobahn. But soon enough the next traffic jam pops up on the horizon of the display. Sometimes the heavens supply the answer and beam it directly into our : we’ll be happy to take the prescribed detour through the Black Forest.

The local playground for the denizens of Baden-Württemberg is a worldwide symbol of Germany’s natural beauty. And that’s exactly what we want. Just past Freiburg, blue mountains loom in the fog; somewhere in there the road rises up into a solitary and wild realm full of black secrets, voluptuous charms, deceptive boredom, and curves. Curves. Curves. That, too, impressed itself upon the memory of the inner eight-year-old who spent his childhood at holiday camps in the Black Forest and now just wants to get home. Flashback. Déjà vu. Come again? Where do we have to go?

The navigation system, recently so helpful in planning our escape from the traffic nightmare, wants to return to the Rhine valley; no one has told it that it’s hell down there. Hell? What was that again? Now I remember: We have to go to Himmelreich (Heaven), Höllental (Hell Valley), to the cuckoo clocks, waterfalls, Wolfach, Schiltach, Hausach, Freudenstadt, Baden-Baden—the mental map of my childhood seems to have a few gaps. It’s full of emotions, anxiety, swimming pools, and popsicles, but little use for serious orientation. 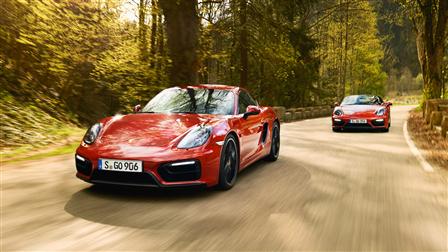 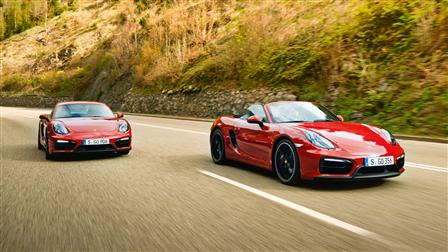 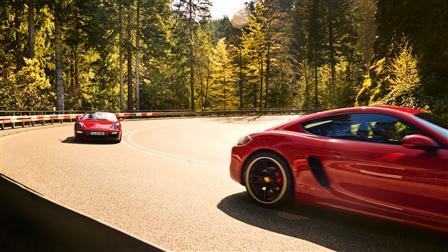 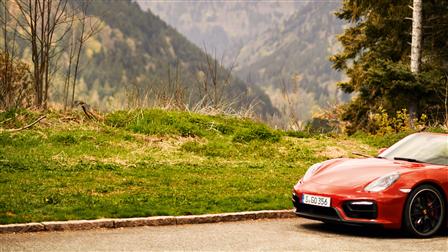 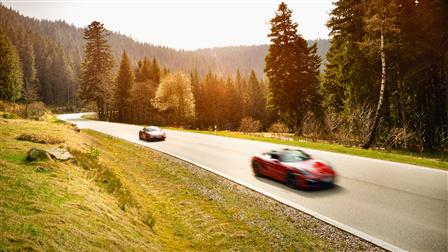 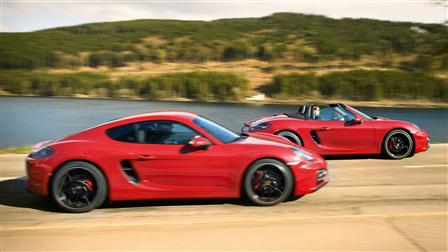 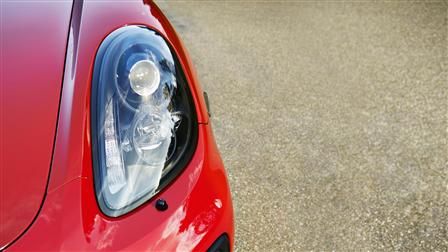 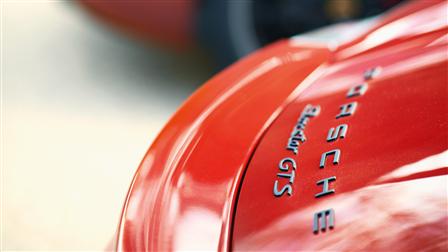 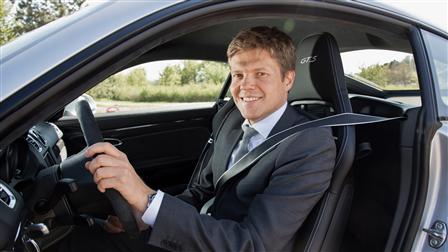 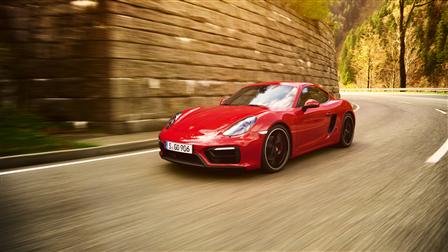 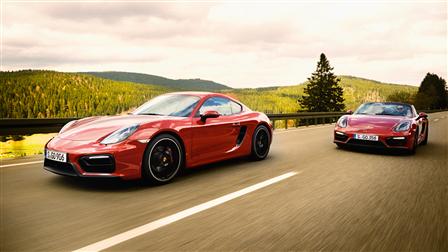 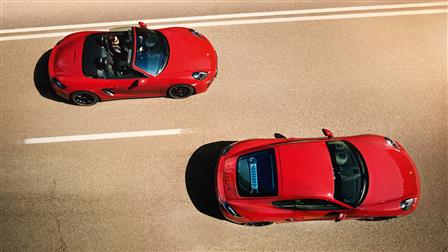 We set the map of the PCM navigation system to a reasonable scale and let the GTS do its thing. First, we just generally head east, and then drift northward little by little. That’s the plan. It’ll all work out somehow. In no time we’ve shrugged off the cobwebs of the monotonous highway; the chance to fly through the Black Forest in the GTS and outflank the autobahn while we’re at it has us in high spirits.

What an adventure! Finally, a real challenge for the mid-engine sports car. As if remotely controlled, the gently sloping nose of the heads on to Landstrasse 124; the sign said Schauinsland and that sounds vaguely familiar. When the GTS meets the first hairpins just after the turn to Horben, our motorsports memory is reactivated all of a sudden: until well into the 1980s, the Schauinsland road was one of the major German hill-racecourses; the battles were intense, and the GTS feels right at home. Its legendary forerunner, the 904 GTS, left its mark at Schauinsland as well. Almost fifty years later, the GTS seems to want to prove to its famous namesake that it, too, is a dyed-in-the-wool hill racer.

With its raspy baritone singing to the trees and sky, the storms up the brief inclines between the switchbacks with explosive acceleration. With spirited late-braking before the hairpins, now the optional ceramic brakes show what they can do: unbelievable power and a rock-hard pressure point inspire the highest confidence as well as braking points inching ever closer to the turns.

Then ease off the brake and steer into the turn: energetically, as if drawn with a compass, and without the slightest hint of oversteer, the GTS dives into the curve—a brilliant embodiment of the mid-engine genus. Even the normal shows its best side in situations like this, but the GTS cranks it up yet another notch. It operates with supreme confidence at the absolute limits; only pure-bred race cars, perhaps, push the envelope further. Half a century ago the 904 GTS was designed as a street-legal racer—here in the ancestral stomping grounds of this vehicle concept, we see that the GTS interprets its nature just as strictly, but in reverse order: a street-car with a built-in racing license.

At the Schauinsland pass it finally dawns on us that the adrenaline has swept us too far to the south, and so we drift into a change of direction. There it is, the village of Heaven right at the entrance of Hell Valley: a few houses and then the road disappears into the ever-narrower gap between the mountainsides. After a few kilometers, the growls its way under the overhanging cliffs of Hirschsprung (Deer’s Jump), and all of a sudden the memory is there: a car full of kids listening raptly to the tale of the hunted deer, and then looking, all of us full of awe, at the statue on the cliff from which the harried deer is supposed to have jumped over the gorge.

A few last curves and then the GTS bursts out of the valley and onto the magical B 500, which traces the entire ridge of the Black Forest all the way to Baden-Baden. Bingo! From now on, getting lost is impossible. To make our way northward, we just have to follow this route. The GTS unpacks a massive acceleration; going by the numbers, its 11 kW (15 hp) over the S are worth just tenths of a second, but in terms of emotion it simply feels punchier and more gripping than its brother. Here again, ’s GTS philosophy shines through: Take it to the limit. Be a purist. Uncompromising, pure sportiness.

As we continue to push the GTS even further, we are increasingly fascinated by the character of this concentrated paragon of athleticism. In the darkness of morning we left the Mediterranean behind, made a beeline through three European countries, and now this fabulous car has managed to kiss us awake once again. With quiet enjoyment we sink into the rhythm of acceleration and slowing down, driving into and out of corners; the GTS veritably dances through the tight, deep-green valleys. It is precise, muscular, and immaculately defined.

At the famous market square of Freudenstadt we roll out next to a that’s just cruised into town from the other direction. The driver is either a fellow victim of the traffic jam, or a kindred connoisseur of the curves. We immediately recognize the GTS: its characteristic front apron with the large center grille and dark background on the headlights and taillights. Roll down the windows, a quick greeting, and, of course, we can’t resist the next impulse: car swap.

Why don’t we drive the last kilometers of the Black Forest ridge road together? We pull over, shake hands, exchange a quick nod, and get back on the road. The only difference is that now we can experience the typical facades, the Black Forest cake tourists, and the sleepy charm of the towns à la Cinema­scope from the seats of the GTS. The rich sound from the standard sports exhaust systems rips down the roads; impatiently our little GTS convoy rolls to the city limits. Then the treetop waves of the evergreen sea wash over us: nothing but air, wind, and speed.

The GTS is every bit as impressive as its coupe sibling. It splits the dark tunnel of the trees like a whirlwind. This drive could last forever. But eventually the loop must end. When we spot the blue sign announcing the autobahn junctions just before the spa town of Baden-Baden, we stop on the side of the road. The stranger in the says just one sentence: “You know, you can also get to Stuttgart driving through the Black Forest.”—Nods of agreement. Of course!

The tour goes into overtime.

Dr. Stefan Weckbach, head of the and model line, talks about the idea behind the GTS mid-engine sports car.

For some, it may be just a red background on which the rpm range is displayed. For the growing GTS community among drivers, which for the first time finds the famous three letters in the current mid-engine sports cars, it’s an unmistakable indicator of the added power and features which these fortified versions with their communication packages provide. And for Dr. Stefan Weckbach, the head of the model line, such details are not just the visual expression of inner values but also among the elements that comprise the harmonious overall package “that is GTS-specific.” Notably in the interior of the GTS and GTS, the design, materials, and finish fulfill the promise made by the modified front end.

“We have highly emotional models, and that has to be evident in every possible way,” says Weckbach. There are more powerful engines, more powerful acceleration, and a more powerful appearance, as evidenced by the logo embroidered in the headrests, as well as the highly accentuated seams. When asked to characterize his two athletes in a single word, the expert’s first response is the term “active.” But then he shifts into another GTS verbal mode and adds, “Offense!” In later show-and-tell sessions around ’s research and development center in Weissach, where the and acquired their genes, the attributes active and offense were confirmed many times over. Add them up and you get another characteristic: attractiveness.

Especially with precise braking into corners and accelerating out of them, the philosophy of the GTS forebears reasserts itself each time anew. Curvy roads are made for the new duo—the GTS and GTS are distinctive equals.

That ever-present extra finds its expression in the standard Sport Chrono Package, the added 10 newton-meters of torque over the respective S models, and—thanks to a finely optimized engine setup—an additional 11 kW (15 hp). The new top-of-the-line roadster is the first to hit 281 km/h. That’s how precisely the core competence that Stefan Weckbach so enjoys talking about can be measured. And when it comes to numbers, the 37-year-old is nobody’s fool. After his business studies, he earned a doctorate at the University of St. Gallen in Switzerland and worked as a business consultant. He joined in 2008 and took over as head of the Board Office and assistant to the Chairman of the Board. Later, this father of two young daughters took over responsibility for product strategy. Since 2013 he has headed the ­/ model line.

He feels right at home in the business of building sports cars. “It was a conscious decision to enrich the product substance of the models,” says Weckbach. For him, the GTS models are a clear affirmation of ’s commitment to always build the sportiest car in the vehicle segment—through the adroit combination of driving dynamics, uncom­promised comfort, and exclusive features. For the head of the model line, the GTS models shine through the “sum of their capabilities.” They provide good, honest driving enjoyment.

By Till Daun
Photos by Victor Jon Goico