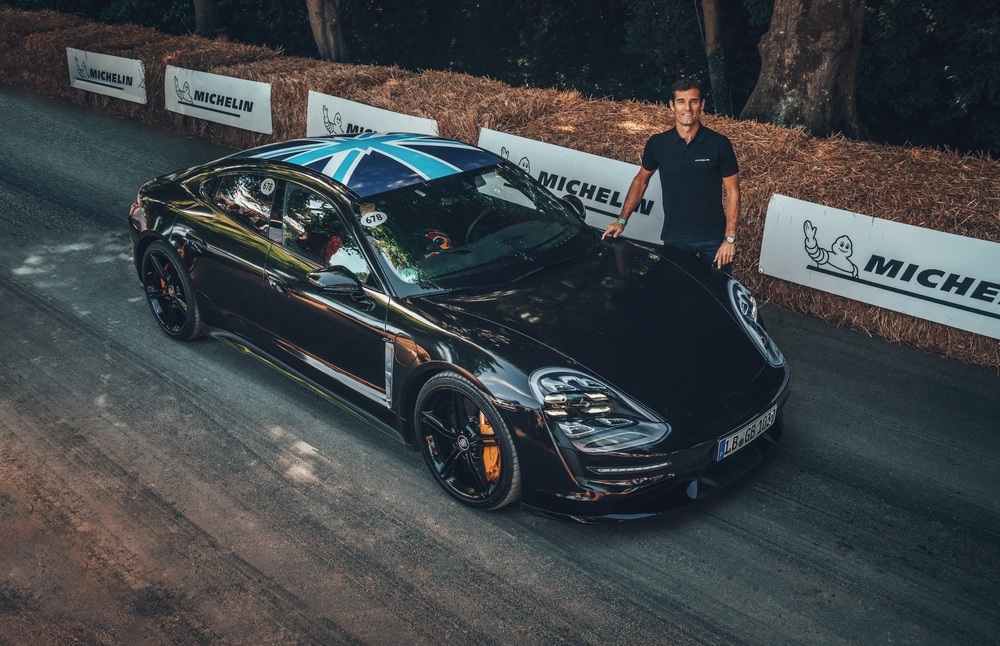 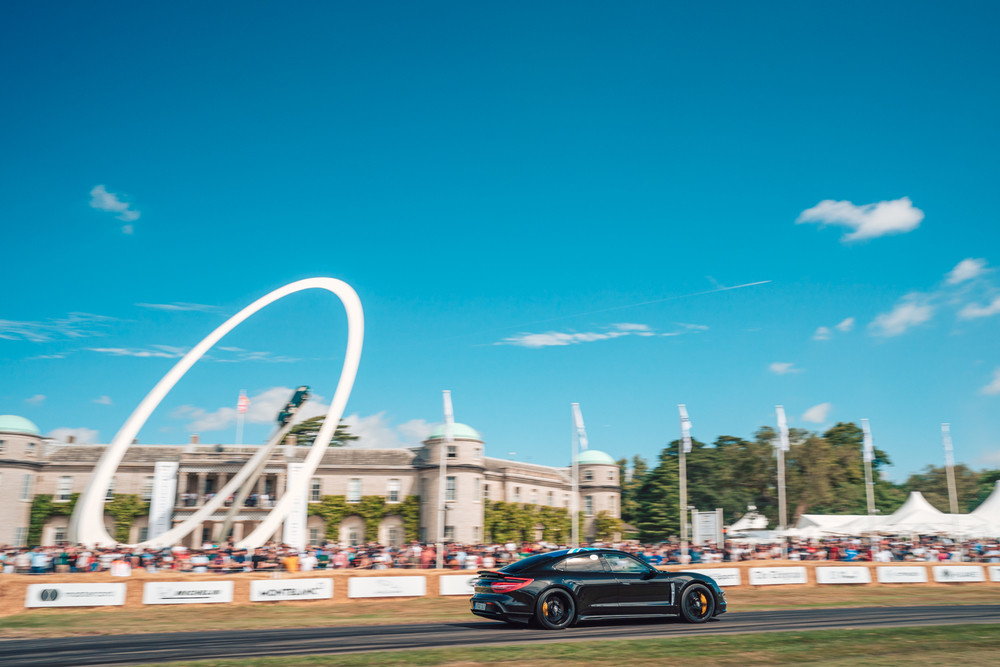 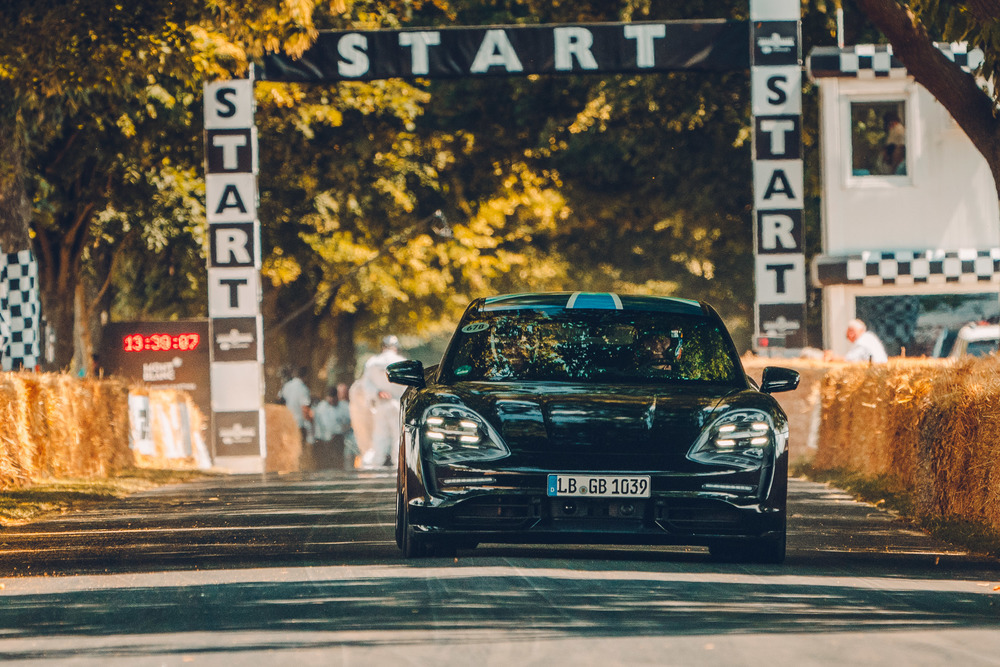 Garden party with plenty of horsepower: visits the Festival of Speed Half-time in the Triple Demo Run

Stuttgart/Chichester . For the first time, is adding an electric sports car to its line-up on the legendary Goodwood hill. The debut is part of the Triple Demo Run, in which the will make three appearances on three continents in three weeks. At Goodwood, the prototype will compete with a union flag graphic on the roof and Mark Webber at the wheel.

“The ’s power delivery is awesome,” reports the experienced Formula 1 driver. “I took part in this event in a 911 GT2 RS two years ago, so I already knew that it all comes down to power and traction. But, even for a thoroughbred racing driver like me, it is amazing how the – even though it’s still a prototype – accelerates off the start and out of the corners,” says Webber.

Last week, the was taken for a spin by Chinese racing driver Li Chao. The Cup Asia competitor completed demo laps on the challenging handling track at the Experience Centre (PEC) in Shanghai. Works driver Neel Jani will get behind the wheel of the for the season finale of the ABB FIA Formula E Championship taking place on July 13 and 14, 2019 in New York City. As a result, the will have visited China, the UK and the US – some of the biggest markets for ’s first all-electric sports car.

The will be presented in September and launched on the market at the end of the year. As to be expected from the brand, the development goals for the all-wheel drive vehicle with over 600 PS included circuit performance and multiple acceleration runs, as well as a range suitable for everyday use. The car’s 800-volt architecture will enable short charging times and the lithium-ion battery will boast a capacity of around 90 kWh.

The driver: Mark Webber
Professional racing driver Mark Webber (42) last competed as a works driver for in the FIA World Endurance Championship, in which he drove the 919 Hybrid in the LMP1 class. In November 2015, the Australian driver became World Endurance Champion alongside Timo Bernhard and Brendon Hartley. Webber competed in Formula 1 between 2002 and 2013, during which time he racked up some impressive statistics: 215 races, nine victories, 42 podium finishes, 13 pole positions and 19 fastest laps. Mark Webber has been a brand ambassador since November 2016.

The track: Goodwood Hillclimb
The Sunday Times once described the legendary hillclimb at the Festival of Speed as a “cross between the Monaco Grand Prix and Royal Ascot”. Every year, almost 200,000 motor sport enthusiasts visit the unique event in West Sussex in the South of England. Narrow, uneven and hedged by bales of straw, the 1.87 kilometre track presents a challenge for drivers and vehicles alike. The course runs through the grounds of Goodwood House, the residence of Charles Henry Gordon-Lennox, 11th Duke of Richmond, and an absolute motor sporting enthusiast, who founded the Goodwood Festival of Speed in 1993.


Further information, film and photo material in the Newsroom: newsroom.porsche.com

* Data determined in accordance with the measurement method required by law. Since 01 September 2018 all new cars are approved in accordance with the Worldwide Harmonized Light Vehicles Test Procedure (WLTP). You can find more information on WLTP at www.porsche.com/wltp. From 01 January 2019, all fuel consumption figures are shown as determined in accordance with WLTP. CO₂ figures will be shown as NEDC-equivalent values, as CO₂ based taxation will continue to be based on an NEDC value (derived from WLTP) until 06 April 2020. For Plug-in Hybrid Electric Vehicle (PHEV) range and Equivalent All Electric Range (EAER) figures are determined with the battery fully charged, using a combination of both battery power and fuel.

Values are provided for comparison only. To the extent that fuel and energy consumption or CO₂ values are given as ranges, these do not relate to a single, individual car and do not constitute part of the offer. Optional features and accessories can change relevant vehicle parameters such as weight, rolling resistance and aerodynamics which may result in a change in fuel or energy consumption and CO₂ values. Vehicle loading, topography, weather and traffic conditions, as well as individual driving styles, can all affect the actual fuel consumption, energy consumption, electrical range, and CO₂ emissions of a car.

** Important information about the all-electric models can be found here.