The also enjoys good conditions in the night with floodlights and a grippy surface.

On the border between Oman and the United Arab Emirates a wonderful, seemingly endless mountain road with panoramic views stretches out to the horizon, making it a true pleasure to drive with a GTS.

There is nothing quite like a long mountain road, with a smooth, consistent combination of long, flowing curves, making steering corrections almost unnecessary. Good visibility as well as a wide runoff zone to handle eventualities with the necessary elegance instill a deep sense of calm in the driver, allowing him to gradually exploit all of the performance capabilities of a fine machine such as the GTS. On the border between Oman and the United Arab Emirates, such a road begs to be discovered.

The topography of the landscape surrounding Dubai is considered one of the most attractive in the Middle East. The region’s one truly long road starts at the coast, in the midst of a skyscraper oasis full of daring, slender, tall, and populated towers, and runs south for about 165 kilometers. At the border between the United Arab Emirates and the Sultanate of Oman, a range of mountains rises out of the sand. Jebel Hafeet—a bizarre upheaval of light-colored rock that shimmers in faded hues of marbled rose in the light of the setting sun—is 26 kilometers long and nearly 5 kilometers wide, and rises up to 1,350 meters above sea level.

Middle East & Africa, the regional corporate office in the Middle East that is also responsible for Africa and India, keeps an SUV in graceful sports-car guise ready precisely for such drives into the Arabian desert: namely, a GTS painted in Carmine Red with 20-inch wheels and a 324 kW (440 hp) V6 bi-turbo engine. Generally speaking, all s have the technical capabilities needed to reach both on- and off-road destinations in Dubai and the surrounding area.

The striking sand dunes of the United Arab Emirates are not entirely new to the . With lowered pressure in their tires, the camouflaged development and prototype vehicles rummaged through the sand to their hearts’ content. Test-drivers and development engineers powered the next generation of SUVs up steep hills and plunged straight down on the other side, carving sharp curves into plush carpets made of the finest sand.

Twilight lends a gentle romantic ambience to the mountain, which the heat preserves on into the night.

In downtown Dubai, the GTS initially limits its attention to meeting its social obligations. True off-road capabilities are not really needed on splendid, four-lane boulevards illuminated by streetlamps shining bright as floodlights. Instead, what is called for in this glittering world is a commanding presence. Among the usual luxury vehicles here, the GTS casually shows off its sporty character.

Here, in this oasis of dazzling light and magnificent wealth, the car can be anything that circumstances demand: an off-road vehicle with ample clearance suitable for the desert, or, simultaneously, a sports car with a resounding output, generous torque, and select features such as sports seats, a sports steering wheel, and an instrument panel with five circular gauges. The interior of the GTS is generously lined with black Alcantara® and decorated with deviated stitching in the color of the car—in this case, Carmine Red.

Dubai is expanding in all directions with its man-made islands in the Arabian Gulf and skyscrapers such as the nearly 830-meter Burj Khalifa. Additional districts and their business parks are sprouting up in between, creating the need for more city highways with six, eight, or ten lanes plus frontage roads as well as corresponding gigantic intersections and turnoffs. Visitors have a good chance of losing their way. Luckily, the GTS calmly glides down the wide boulevards with an excellent sense of direction thanks to its proven navigation system.

Once outside Dubai, the long journey begins, covering around 160 kilometers straight through the desert to the oasis city of Al Ain. A four-lane freeway without a single curve, on which speed is monitored by radar at regular intervals—none of this is a challenge for the . For those inside, there is good-tempered ennui, livened by views of the desert. Sand, stone, and dust are interspersed with austere rock formations, yet with all manner of variation and life. A parachuting school stands right next to the freeway, followed by an expansive oval track for camel races, industrial buildings, a quarry, villages, heat, and music from loudspeakers.

One lane down: Concrete crash barriers protect the cliffs more than the cars.

Al Ain is spread-out and flat, with a population surpassing 600,000 inhabitants on the same surface area as Paris. Most of its streets have three lanes, and its roundabouts look like miniature racetracks. Were it not for speed limits and traffic lights, you could keep your right foot firmly planted on the gas pedal. We pass more long straight stretches interspersed with roundabouts, more rock formations on the horizon, and finally the saturated color of the Green Mubazzarah, a series of hot springs in the desert with an adjacent lake, along with meadows that resemble golf courses.

The finally gets the green light to start up the Jebel Hafeet mountain road. The soft grass on the meadows forms a stark contrast to the arbitrary formations of rock, stone, and dust. The speed-restricted road runs right between them as if drawn by a ruler, two lanes going uphill and one lane going downhill. It begins harmlessly with a gentle ascent. You then suddenly find yourself between crash barriers in the form of walls of rock, while the curves get tighter. The Jebel Hafeet is 11.7 kilometers long and has an average gradient of 8 percent and more than 60 curves, which means an average of one every 195 meters. A German company built this mountain road in the 1980s, although “build” might not be the appropriate term. Instead, it blasted the road into the rock and laid such artful curves it might as well have been commissioned to design the one true hill-climbing course. The approach has now paid off; the is taking the first curve in stride as we start to gain elevation.

The speedy progression is due both to the car’s generous torque of 600 newton-meters and to the mountain road itself. Jebel Hafeet is not the paved modern version of an ancient camel route in Oman or a Bedouin trail over the mountains, but rather, quite simply, a scenic road with an ideal layout. And ideal layout means: there are no abrupt changes in the gradient; the road ascends and descends at a regular rate; and—even more important—the road shows no variation in its curve radius.

These curves are splendidly laid and meticulously asphalted, forming a well-conceived and calculated ribbon of black pavement through the rocky outcropping at the edge of a hospitable desert. The curves are so similar and uniform in radius that no corrections are needed at the wheel. Once you turn the wheel, the GTS holds the line until it exits the curve, provided that you apply the same degree of pressure to the accelerator.

These conditions generate a constant gentle rhythm born of the desert and shaped by the walls of rock. The GTS offers a variety of suspension settings for this ride. Comfort mode is the plush setting tuned for an outing with the family. Then there’s the tauter Sport mode, and finally Sport Plus, which could be dubbed the Walter Röhrl program for the mountain. The road ends at a large parking lot on the ridge, and also features ample rest areas at the best viewpoints along the way. Information panels describe a rich and diverse spectrum of fauna. All types of animals from the Arabian Peninsula can be found here, from bats to snakes, albeit largely hidden in an extensive system of caves underneath the road.

The road embodies the simple philosophy that the journey is actually the destination. On driving up you will reach the top at some point and enjoy a wide-ranging view of the surroundings. To the south lies Oman, or the Omani desert, without any roads or settlements, and gazing north toward Dubai you first see the level city of Al Ain. If the sky were clear, as in the European Alps, the slender height of the Burj Khalifa would be visible on the horizon. What dominates here, however, is flickering heat and shimmering air.

From an aerial perspective, the road with its layer of black asphalt looks like a racetrack for model cars. From the itself the view is similar. With no blind curves and a uniform road surface, Jebel Hafeet could be the mother of all hill-climbing courses, not as high as Pikes Peak in Colorado, not as winding as the Grossglockner High Alpine Road in Austria, but reliably constant.

Of course, there is also traffic. On weekdays the road is essentially empty, with a few locals adhering strictly to the speed limit as they drive moderately uphill and humbly downhill. Knee-level crash barriers line the road even before the walls of rock begin. Two lanes up: no scratches. One lane down: uh oh—numerous black skid marks reveal intense contact between cars and the concrete wall, often along the entire course of a curve. And on the lower part of the road a truck lies on the slope below, picturesquely placed like a steel sculpture on a rock.

The true character of Jebel Hafeet comes alive at night. Traffic starts up when a deep blackness sets in above the streetlamps. SUVs, sedans, and motorcycles fill the parking spots, and their passengers set up small caravansaries replete with carpets and ghetto blasters high above the desert. The wind begins to blow, the temperature drops from over 40 to a comparatively cool 30 degrees Celsius, children engage in lively games, the curves echo with the sound of engines, and the lights of civilization glow in the city of Al Ain.

What to do on Jebel Hafeet

This scenic road climbs higher than the Burj Khalifa skyscraper and offers stunning views of the desert.

Not in the summer

Daytime temperatures in the summer can climb to over 50 degrees Celsius, which is why the other seasons are more conducive to traveling in the United Arab Emirates. Dubai offers tourists a high-grade infrastructure and many recreational opportunities.

In a in the desert

An SUV offers an intense, close-up encounter with the desert’s many sand dunes and rock formations. Desert camps preserve traditional Middle Eastern splendor in the shadow of the high-tech metropolis of Dubai. There are two large buildings on the crest of Jebel Hafeet: a palace of the ruling family and a Mercure hotel—both with spectacular views.

Book a ride up to the observation platform of the tallest building in the world, the Burj Khalifa in Dubai, a few days beforehand. The Dubai Mall, located within sight of the Burj Khalifa, features not only all of the world’s luxury brands but also an enormous aquarium, including sharks that swim in restless rounds. 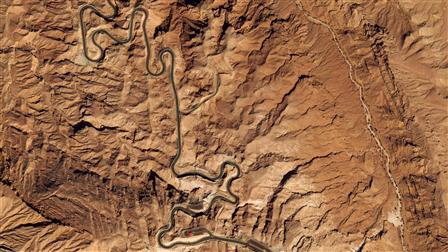 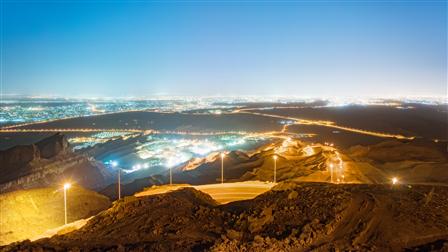 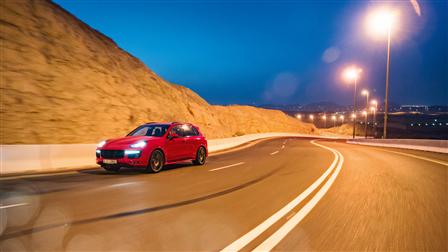 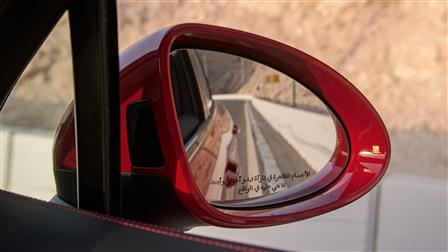 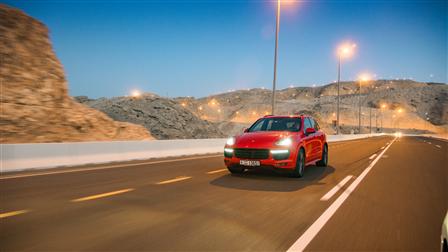 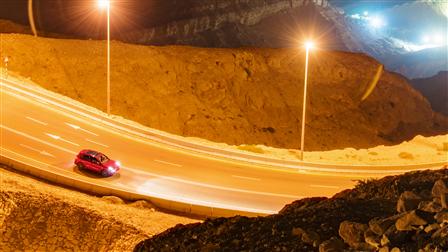 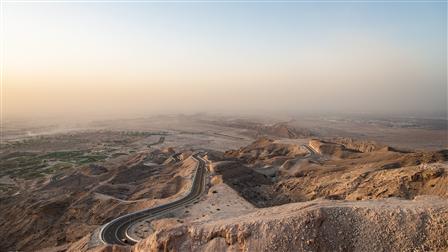 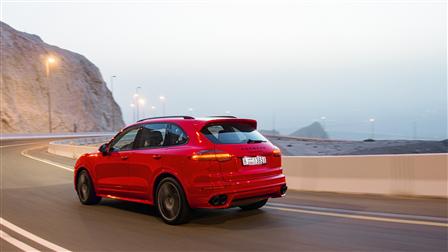 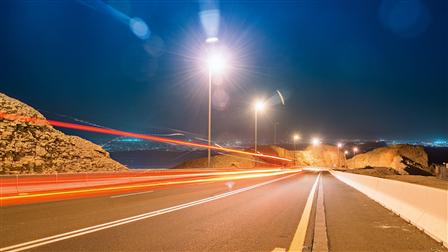 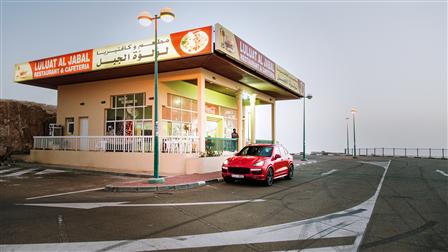